It’s been a long time since this band has been talked about around these parts, but “New Year, who dis?”

Full disclosure, this is a bit of ‘self-promotion’ since we’re going to talk about a band I played in a long, long time ago…

Two decades ago in a college town in the middle of Pennsylvania a group of six idiots sprang forth with a goal of drinking a metric shit ton of beer and playing some sort of mix of horn driven pop-punk that was too ska for the punk kids and too punk for the ska kids. Or something like that.

That group was No On 15 and from town to they spread their infectious blend of party anthem pop-punk punctuated by a three piece horn section and a lot of beer. And I mean a lot of beer. See what I’m getting at there

Over 20 moons ago the band set out to work with Steve Foote (of Big D & the Kids Table fame) at Fork In Hand Studios to record their opus. To mix the record the band headed to Fort Collins, Colorado to work with the legendary Bill Stevenson of The Descendents/The Blasting Room fame. It was honestly some of the craziest shit I’ve ever done and seen. We got to record with one of our favorite and most respected dudes in Steve and mix with arguably the best punk drummer ever. Oh yeah, and we got to see Bill Stevenson fart/shartle on a glass door in the studio. I shit you not, but I digress.

Like just about every good punk story it wasn’t to be. Before a planned tour with The Code and the release of Meet the Lads the band fell apart like all ‘legendary’ bands should leaving the rest to stories and myths.

Eventually Meet the Lads was released digitally and maybe someday it’ll get a proper vinyl/physical release. It’s been in the works for a bit… just needs a few loose ends to make that happen, but in the meantime why not have a lil’ fun? Would or does anyone even really care? Probably not, but why the ‘F’ not, right?

Three of the songs that were never included with Meet the Lads but part of the Fork In Hand/Blasting Room recording and mixing sessions were sort of forgotten. When cleaning through the Jump Start basement I came across some old discs with all the original mixing files from those sessions, and low and behold there were two songs outright that had never been released with a third song that had only been released on a label compilation way back in the day, albeit a different version. So, two of these songs, “Party at Fuz’s” and “Valerie” are seeing the light of day for the first time ever with this being the first time The Blasting Room mix/version of “Bottle of Rossier” has ever been released.

Having never done a picture 7″ release, now seemed like the perfect time so we recruited long time friend of the band, Brian Dumm of The Keystone All-Stars fame, to handle the artwork for this killer release. Having played a basement show or two with us, Brian knew exactly how to capture a No On 15 house show and his artwork brings back a few infamous parties and memories for sure.

This release is limited to 100 copies. Outside of some act of God this is never being pressed again, so if sophomoric, immature, party pop-punk and ska are your thing pickup a copy and trip the light nostalgic with me. Head on over to our webstore to grab a copy. 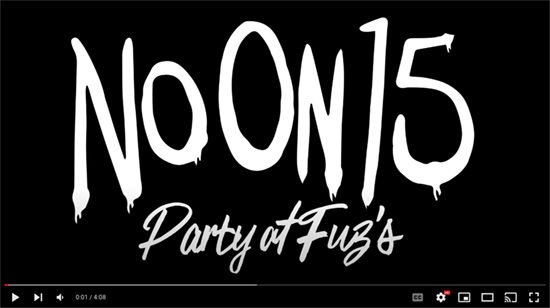 Because the lyrics aren’t immature enough, here’s a sweet lyric video that is definitely NSFW.